This is the Wiki Test instance (http://test-wiki.its.uiowa.edu), a read-only copy of the wiki.

Hello!
I am writing to see if you would be interested in auditioning for the role of “Franco” in Iowa City Community Theatre’s production of “Superior Donuts.”  Please see below for a description of the show.  The actor who played Franco on Broadway was nominated for a Tony!  This is a plumb lead role.  The character is the engine of the show and plays a range of affect including having the gift of delivering many of the show’s funny lines. The show is a drama with funny moments. Official auditions finished this week, so if you are interested in auditioning, please let me know and I can set up a separate time.  Email me at barry-schreier@uiowa.edu and I would gladly set up a separate time for you.  Thanks for any initial interest you may have!
BAS**

DONUTS-Iowa City Community Theatre
Arthur Przybyszewski, second generation Chicago Polish, owns a rundown Uptown Chicago donut shop that has been in his family for 60 years.  Franco Wicks, a young black man and Arthur’s only employee, wants to modernize the shop full circle.  This provocative show, set in the skin of a drama with high comedic moments, explores the human experience of embracing the past, exposing our weakest moments, keeping a damn-fine sense of humor about it all, and finding redemption in the least expected relationships. Superior Donuts is a smart, strongly written Tony-nominated play by Tracy Letts, author of “August: Osage County.”  And there’s donuts!
Rehearsals:  November 26-January 18 (Break December 21-January 2)
Shows: January 19-January 28th 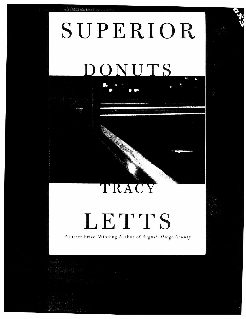