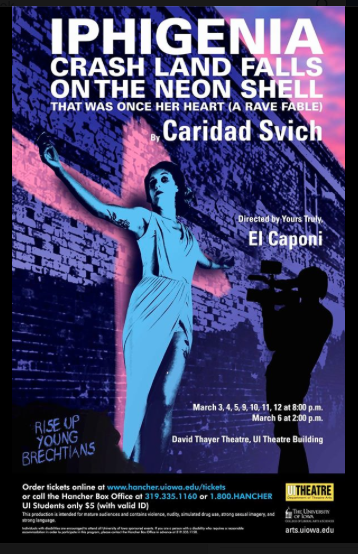 Welcome to the future, a 21st century Brechtian rave. Iphigenia Crash Land Falls on the Neon Shell That was Once her Heart (a rave fable) unleashes a netherworld of trance-steady poetry and ecstasy. In this reincarnation of the classic Greek tale, a ruthless Latin American general plots to sacrifice his daughter Iphigenia in order to gain the sympathy vote to remain in power. Life is given to Iphigenia through music, movement, songs, multimedia projections, and the women of Juárez. OBIE winner Caridad Svich's play as directed by multimedia artist Mario El Caponi Mendoza, proposes the universal question in the context of this rapid-growing 21st century techno culture: Is man’s purpose in life to be a sacrificial object?

Iphigenia Crash Land Falls on the Neon Shell that was Once her Heart (a rave fable) is intended for mature audiences and contains violence, nudity, simulated drug use, strong sexual imagery, and strong language.

In memory of the mothers, daughters and sisters we lost in Juarez.

Young Brechtians, the time has come for all of us to gather up again. It is at a rave where we will all unite. Rise Up, and may we sing truth going into battle...

**Please be aware that the rehearsal process will include filming to be used during the performances.